Should NBA Teams Rush to Form A “Big 3”

Cavs and Warriors easy road to the finals

How Good can OKC be?

Ever since the Celtics formation of the Big 3 with KG, Paul Pierce and Ray Allen every team has been trying to get their own version of a “Big 3”. The 2008 Celtics weren’t the first team to create a Big 3, but they were the team that I can remember most recently to restart the trend. Every team who’s trying to compete for a title now tries to form there own big 3. If done incorrectly this leads to a disaster. So many teams throw money around to pick  up all star veterans that they think can help them win. Unfortunately this ends up with teams signing players for a big name rather than their actual need. The most recent example of this is the Chicago Bulls, who are trying to form a “Big 3” with Rondo, Butler, and Wade. The problem is these pieces don’t fit, none of these 3 can shoot 3’s. In a 3 point driven league this is a huge problem. They would’ve been better off with signing a 3 point specialist or a young player to help them rebuild. The best player is not always the best fit for a team. The Knicks are trying to form a “Big 3” of their own with Carmelo, Rose, and Porzingis. This is a Big 3 where all players are at completely different points of their career. Porzingis is emerging, but still needs time to grow as a player, Carmelo is at the end of his prime, and Rose can not stay healthy and it looks as if his best days are behind him. Why go ahead to form a big 3 if you can’t beat your competition? Having a Big 3 makes your team exciting and helps marketing in the summer, but unless the fans see results it won’t matter.

Do you need a Big 3? It’s very easy to say yes. In today’s NBA a lot of the top teams have a version of a “Big 3”. However if we really look at it they are often times a big 2 with an addition high level player that they just call a big 3 for marketing purposes. Take the Champion Cleveland Cavaliers, They really have a big 2 with Kyrie and Leborn. Kevin Love isn’t really a big 3. Only when marketing the team do they try to make Love a big 3 member, but when you look at their game plan and the Stats it’s clear that it really is a big 2. If a team wants to compete for a title I think they need at least 2 stars. After the 2 stars I would choose to get higher level role players with the remaining Cap space instead of trying to overpay a 3rd member and form a Big 3. When a team has so many All Stars that doesn’t give each player a lot of room to shine or get their own Stats. There is still only 1 ball. It would be better to have players that can effectively serve their role than have a high priced All-Star that can not fulfill their potential. A great example of this is last years Clippers and last years Thunder. The Clippers had a Big 3 in De’Andre Jordan, Chris Paul, and Blake Griffin; the Thunder had the duo of Russell Westbrook and Kevin Durant. The Thunder were the better team because they had better role players, Steven Adams, Enes Kanter, and Dion Waiters played solid minutes and helped them come within one game of the finals. The Clippers were exposed when Chris Paul went out; the bench was a steep drop off from their core group of starters. In order to go deep in the playoffs you have to have a few guys that can play effectively off the bench.

The Warriors were so good last year because they were deep and had a “‘Big 3”. However the Warriors did not get a big 3 by over paying free agents from other teams. They drafted each member of the Big 3 and they grew into their role. By 2015 they were so used to playing together that they had the team Chemistry down. This is an issue many teams have when they bring all-stars together. It took Miami half the season to figure each other roles out in 2011, and they didn’t reach their peak until 2 years of playing together. So don’t assume that with all the talent on The Warriors that they will play well together and win it all next year. The Warriors will have a “Big 4”, but that doesn’t mean that all the pieces fit. Talent is not all it takes to make a team great. A team with the top 5 centers of all time wouldn’t  win anything because they’d be missing the different roles. I expect the Warriors to have a big of a rough patch in the beginning of the season next year, with people doubting if the pieces fit. Ultimately they will figure it out, and when they do watch out! 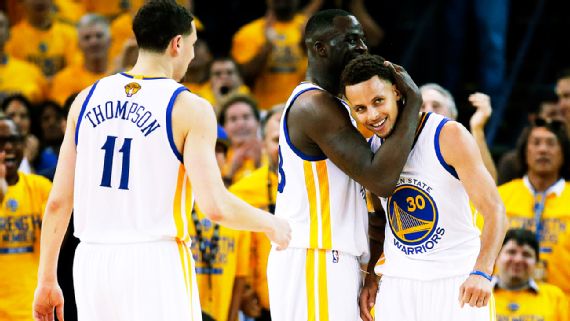 A Big 3 when done correctly can be amazing, but teams should not rush into forming one just because of how it will look. If your team is not close to contending for a Championship adding a couple of aging stars will not get you there. Rebuilding for many teams is the better option than creating a make shift Big 3 to make noise.

Cavs and Warriors easy road to the finals

How Good can OKC be?

My Tweets
My Tweets